This Sharpless object SH2-188 taken on September 11th and 12th of 2012 is a planetary nebula found in the constellation Cassiopia. First discovered in 1951 at the Simiez observatory in Russia and cataloged as Simiez 22 and later cataloged by Sharpless as Sh2-188, this object was thought to be a super nova remnant due to its wispy filament structure. It wasn't until the 1990's that this was classified as a planetary nebula. Similar in appearance to Sh2-274 (Medusa Nebula) Sh2-188 is the result of a dyeing star shedding its outer layers of gas and dust though its age is thought to be only 22,500 years.
A unique feature of this nebula is the faint but visible leading edge ahead of the brighter filament structure at the left side in this image. This area displays a bow shock effect which is the result of the nebulas fast moving central star speed of approximately 125km/sec interacting with the interstellar medium.
© Ian Stewart 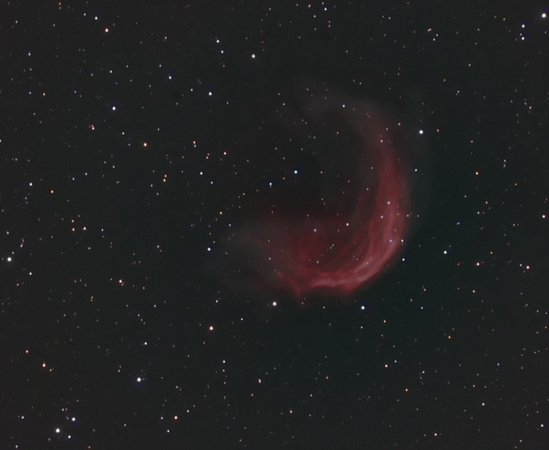