M38 from the previous night (see last image) and NGC1907 from November 26th 2017.
The open cluster M38, which is shown on the top of this image, is one of the three larger clusters of stars in the constellation Auriga which also includes M36 and M37. This particular object is considered an intermediately rich open cluster of stars, each of which is estimated to be 200 million years old. Located in the disk of our Milkyway galaxy, M38 is still young enough to contain many hot blue stars, although its brightest star is a yellow giant shining more than 900 times brighter than our own Sun. M38 spans roughly 25 light years across and is located approximately 4000 light years from Earth.
The smaller open cluster on the bottom of this image is NGC 1907. This cluster is older than M38 and is estimated to be nearly 500 million years old. It contains approximately 30 stars and is located about 4,500 light years from Earth.
© Ian Stewart 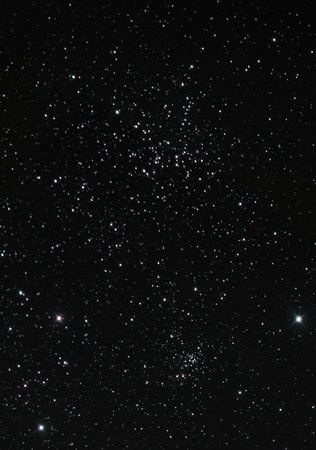