Messier 67 (also known as M67 or NGC 2682) taken on February 24, 2014 from Creedmoor NC is an open cluster in the constellation of Cancer. M67's Trumpler class is variously given as II 2 r, II 2 m, or II 3 r. It was discovered by Johann Gottfried Koehler in 1779. Age estimates for the cluster range between 3.2 and 5 billion years, with the most recent estimate (4 Gyr) implying stars in M67 are younger than the Sun. Distance estimates are likewise varied and typically range between 800–900 pc. Recent estimates of 855, 840, and 815 pc were established via binary star modelling and infrared color-magnitude diagram fitting, accordingly.
M67 is not the oldest known open cluster, but there are few Galactic clusters known to be older, and none of those are as close as M67. M67 is an important laboratory for studying stellar evolution, since the cluster is well populated, obscured by negligible amounts of soot, and all its stars are at the same distance and age, except for approximately 30 anomalous blue stragglers, whose origins are not fully understood.
© Ian Stewart 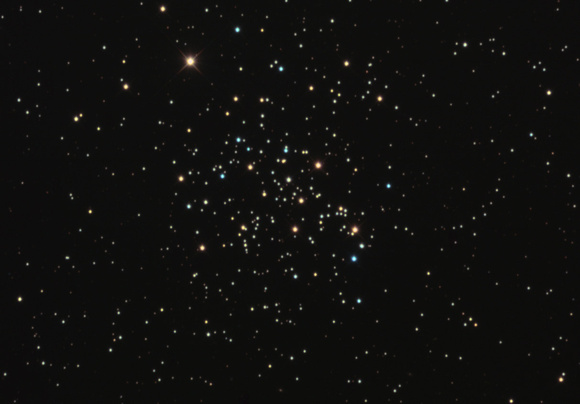